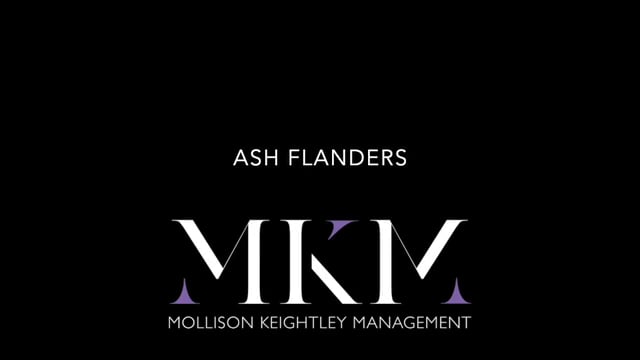 Ash Flanders is a multi-award winning playwright and screenwriter from sunny Melbourne. In 2006, he and Declan Greene formed theatre company Sisters Grimm and together they have written a dozen shows including Summertime in the Garden of Eden (Theatre Works, Griffin Theatre), Little Mercy (STC), The Sovereign Wife (MTC), Calpurnia Descending (Malthouse/STC), and Lilith: The Jungle Girl (MTC). Ash has also created the solo shows Meme Girls (Malthouse), Special Victim (Feast Festival), Playing to Win (Arts Centre Melbourne), Ash Flanders is NOTHING, End Of (Darebin Speakeasy), as well as SS Metaphor at The Malthouse Theatre.

He co-wrote the web series FRIENDLY (over 10K views) and has a slate of fresh screen projects in development, including a series taken from the world of his solo shows.  In 2014, a portrait of Ash by Wendy Sharp was included in The Archibald Prize.

'Flanders puts in a phenomenal performance and brilliant comic timing playing all of the victims of BBB’s murderous spree.' ★★★★½

'Ash Flanders, equally endearing in a range of screwball guises, each one hilarious and wonderfully inventive.'

'Flanders generates endless hilarity playing a cast of thousands. Many of his sketches are black lampoons of mainstream Australian culture.' ★★★★
Sydney Morning Herald

'Ash Flanders... is an absolute star as he transforms into several characters without missing a beat.'

'Flanders is an absolute riot in a cavalcade of caricatures... he sets the tone of the play perfectly in an opening monologue as a foppish white man who has just returned from a night of “powerful” Indigenous theatre. ★★★★
Timeout

"Comedic writer/performer extraordinaire Ash Flanders returns [...] A wonderful new work from an established comic performer that solidifies his continuing artistry, as well as expands his range into gorgeously new and beautiful territory!'
End Of. - Theatre Press

"This new performance still maintains that wry bonhomie which makes every anecdote crackle and delight........interspersed with moments of incisive camp are deeply sad accounts...."

"...it’s a testament to the skill and artistry that has gone into the writing and direction that the levity doesn’t feel tasteless or out of place but give them an edge and urgency that couldn’t have existed before." ★★★★★


Ash Flanders Is Nothing - Theatre People

In SS Metaphor, Flanders has achieved a work that sails between deeply funny and strangely deep in this allegorical antidote to lockdown...

"...As Melbourne tiptoes, bleary-eyed out of lockdown, SS Metaphor comically guides us from the darkest waters to hopefully brighter shores."
SS Metaphor - Timeout ★★★★