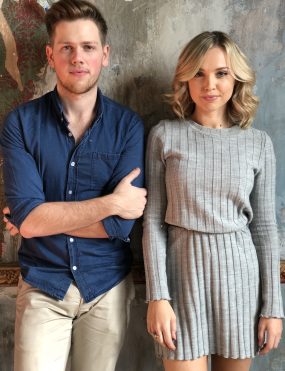 Ashleigh is a writer and performer. She has toured with “Green Days American Idiot The Musical” (Shake ‘n Stir) for it’s Australian Premiere,  played the role of Sandy in “Grease The Arena Experience” (Harvest Rain Theatre) and travelled to New Zealand to take on the lead role, Lillith in the world premiere of “Pleasuredome the Musical” starring alongside Lucy Lawless, directed by Michael Hurst.  Ashleigh performed the role of Ellen in Packemin Production’s “Miss Saigon” winning her the Broadway World Award for Best Supporting Actress In a Musical, and was “thrillified” to take on the principal role of Elphaba in Packemin Productions “Wicked”, earning her a GLUG Award nomination for “Most outstanding performance by a newcomer”. On television Ashleigh has made guest appearances on “Home and Away” (Channel 7), “Deadly Women” (Beyond Productions) and “Underbelly- the Golden Mile (Channel 9)”.  Her Film Credits include “Final Move” (Cinegear productions), “Pandorian” (directed by Harrison Woodhead) and “Best Enemies” (directed by Ross Bark). Ashleigh is a graduate from Brent Street, where she completed her Diploma of Musical Theatre.

Ben Bennett is an Australian actor, singer and songwriter. He has toured nationally with  Green Day’s American Idiot, reprising the lead role of Johnny. He can also be seen on Channel 11’s Random and Whacky playing the role of Will.  Previously Ben starred in the world premiere of Muriels Wedding The Musical with Sydney Theatre Company in the lead role of Brice Nobes.  Ben made his feature film debut in Emo The Musical. It premiered at the Melbourne International Film Festival as well as being selected to screen at the Berlin International Film Festival, going on for cinema release in Australia.  His television credits include, Random and Whacky (Ch 11) playing the role of Will, Home and Away (Ch 7) as Tyson, and Pyramid (Ch 9). He was much loved contestant on The Voice and was top 6 of team Delta. Ben is also, an active member of the music scene throughout Australia.

Ash and Ben have written a musical ‘The Life Of Us’ which was selected to be showcased at the ASCAP Musical Theatre Workshop with Stephen Schwartz in Los Angeles, making it the first ever Australian work to be selected for the highly coveted spot. It will premiere at the Hayes Theatre in January 2020.