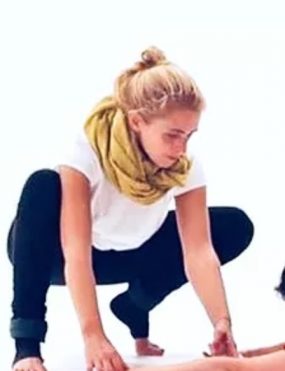 MOVEMENT DIRECTOR:  Originally from the UK, Cheska started her dance career in Paris with a French opera company after studying at the Conservatoire.  She then moved to New York to become part of an experimental physical theatre company. She returned to London 9 years later to train in classical acting at Drama Centre, where she was able to hone her movement skills at the Boris Shchukin Theatre Institute in Moscow as part of an  international exchange programme.

​Cheska now works as a movement director in film, theatre, opera, and the contemporary art world.  In conjunction with her  theatre and opera directing commitments Cheska went on to undertake further study at the National Centre for Circus Arts in London and Circomedia in Bristol. She teaches Movement and Ballet for various London-based drama schools, runs an outreach ballet project in London’s East End,  and coaches acting and movement for private clients.

​Cheska is currently researching new movement practices for actors, taking into consideration and combining the most up-to-date knowledge in the fields of neurology, movement repatterning and fitness training, in order to bring modern movement training inline with the industry’s needs.