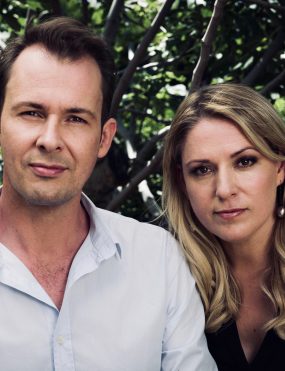 Fiona and Mike have been partners for twenty years; partners in life and in work. They met doing an independent theatre show in Melbourne in 1998. Between them, they have carved out impressive and unique careers in the arts, both as individuals and as a creative duo.

Fiona was head scriptwriter on the ABC3 kid’s television series, Prank Patrol, and has written and co-starred in various sketch comedy shows, including Flipside (ABCTV), Comedy Inc – The Late Shift (Channel 9), and all three series of SkitHouse (Channel 10).  She is the author of the children’s book series, The Super Moopers, three books in Dreamworks Trolls series, and six books in the Miraculous series, based on the successful children’s animation television series. Fiona has been a story consultant for TV shows including The Time of Our Lives, Seven Types of Ambiguity and Bed of Roses.

Mike was head scriptwriter for the 2019 Helpmann Awards, and song writer, music adviser, story consultant and actor in both series of the ABC’s The Time of Our Lives. Mike has written, performed and directed numerous stage and cabaret shows, including The World is Winning, Message to My Girls and Plus One – with Fiona Harris – and worked as a story consultant on Mustangs FC (ABC ME) In 2016 Mike was the Artistic Director of the Melbourne Cabaret Festival.

In 2019 Mike and Fiona released the second series of their internationally award-winning comedy web series The Drop Off, which received principal funding from Screen Australia after winning a dozen international ‘Best Web Series’ awards and has been officially selected for over twenty other festivals worldwide . Channel 9, has recently acquired the short form comedy series and will screen a telemovie version of The Drop Off in 2020.

Fiona and Mike have also adapted The Drop Off into an adult fiction novel with Echo Publishing, due for release in 2020.

“Footy Chicks presents a clever take on the culture surrounding AFL….characters are presented as complex people, though there are elements of caricature for comic affect.”
- 'Footy Chicks' [The Age]

“Rather than being cliched, the various segments play with audience expectations and provide a number of plot twists..'
[The Age]

“…witty observations regarding the status of women in AFL….provides the context for more than a few funny lines.”
[Herald Sun]

"Mike, on acoustic guitar, proves to be a very descriptive story teller. His self-penned songs range from the comical to the emotionally grabbing and his ravings in between songs never fail to entertain."
Rip It Up, Adelaide