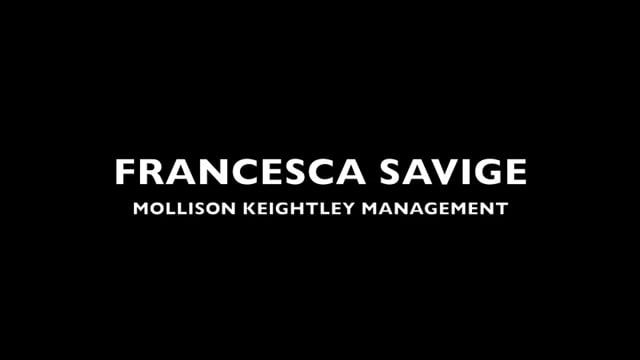 Francesca holds degrees in Theatre and Acting from QUT and furthered her training in Shakespeare at RADA, Shakespeare’s Globe (UK) and Shakespeare & Company (US)..

Frankie has pursued directing and arts education alongside her acting career since graduating. As an actor Frankie’s has worked across Australia and overseas for Sport for Jove, International Actors Ensemble, Auckland Summer Shakespeare, Bell Shakespeare, Queensland Theatre Company, Critical Stages, Griffin, Parramatta Riverside and Old Fitz, as well as making screen appearances in Marley, Someone; The Beehive (Tribeca Short Film Festival); Starting from Now, Home and Away, Packed to the Rafters and Venus & Adonis.

Francesca’s Directing experience includes Sport for Jove’s mainstage and Summer seasons as well Coordinating and directing for the Second Age Project since its inception in 2012. She has also directed for Ensemble Theatre, Bell Shakespeare and renowned drama schools QUT and ACA.

Francesca has over 15 years’ experience as a Drama and Acting teacher, working throughout Australia and internationally with individuals and within school and university institutions.

Francesca received a 2010 Churchill Fellowship to direct and teach Shakespeare in South Africa, a 2015 Globe International Actor’s Fellowship to train in London, UK and in 2017 was a recipient of the Sandra Bates Director’s Award at Ensemble Theatre to work with the company throughout the year. Frankie is a proud member of Actors Equity.

"The direction and casting by Francesca Savige and the creative team were done exceptionally well with each actor playing to their absolute strengths."
- A Midsummer's Night Dream, Absolute Theatre

"Francesca Savige brings a lovely impishness to her role as Abigail Williams. There is a strong sense behind her performance of just the complexity of character... "
- The Crucible, ABC Radio

"Savige’s delight on beholding Orlando is just as deep as her despair at Rosalind’s banishment: both are palpable and convincing...

...Savige is by turns fierce, vulnerable and very human as she takes us with her on her journey...."
- As You Like It, Theatrereview.org

"Francesca Savige’s interpretation of Shakespeare’s major heroine ...lend the romance credibility."
- As You Like It, Theatre Scenes, Auckland

"Francesca Savige delivers a powerfully moving performance as the brave and righteous Starbuck."
- Moby Dick, On The Town