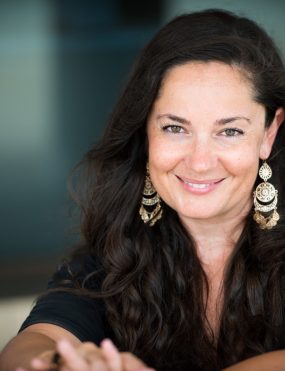 Jeneffa is an Istro-Romanian (the smallest ethnolinguistic group in Europe formally recognised by UNESCO) award winning director. Jeneffa’s work is shaped by her lived experience of being the child of immigrants: her father, an illegal immigrant in the 1950s from the former Yugoslavia and her mother, removed from her family under Australia’s child removal policies to create the illusion of a ‘white’ Australia. Growing up in the western suburbs of Australia as one of the only kids in her town from a culturally and linguistically diverse background, she became a storyteller to be included and to provide inclusivity. Since 1997 she has travelled and worked extensively around the world. Along the way she honed and refined her skills and has accumulated an award-winning body of work as a director, producer, and an acting coach. She directed films; The Honey Makers in London with Executive Producer Alison Owen premiering at Global Impact Film Festival winning Best Cinematography and nomination for Best Sound Design, Fort Lauderdale Film Festival, Mystic Film Festival, Azzurro with Giacomo Gianniotti from Grey’s Anatomy, winning Best Short Santa Monica Film Festival, nominated for Italian Contemporary Film Festival, in Toronto, Gold Coast International Film Festival, Roma Cinema DOC and Oregon Short Film Festival, Super 80 winning selection of the 2018 Straight 8 Film Festival in London BFI, Cinequest Film Festival, Short + Sweet Hollywood, Give Me A Minute… won the Best Australian Short Film at the World Film Fair in NYC, Joy House Film Festival Runner Up Best Short, Giphy Film Festival, Stellar Film Festival and … is the thing with feathers Berlin Film Festival 2020 for Berlin Film Society, 2019 Straight 8 Film Competition London & Encounters Film Festival Bristol. She also directed the dramatic short film, Ordinary premiering 2019 San Antonio Film Festival and Global Impact Film Festival in DC, Venice Shorts and part of the award-winning anthology, Her Mind in Pieces, winning New York International Film Festival and Golden State Film Festival. For theatre her directing highlights: the multi-award winning play Speaking in Tongues for the LA Australian Theatre Company, including a Stage Scene Award for Best Director. In 2018 she directed, Things I Know To Be True in Los Angeles, Australian Theatre Company and The Hammer for the San Diego Fringe Festival. In 2017, The Incredible Here and Now commissioned by The National Theatre of Parramatta, and The Normal Heart at the Eternity Playhouse in Sydney for the Marriage Equality vote. She directed, produced the popular YouTube web series Then That Happened multi-nominated LA WebFest, Be Careful What You Wish for Edinburgh Fringe, Winner-Pick of the Fringe Dolores, and recently a tiny play for Jermyn Street Theatre, London. She also produced, developed and story edited documentaries that have gone on to major film festivals including, Yes Madam, Sir with Helen Mirren which premiered at the Toronto International Film Festival (TIFF). Further highlights include performing The Guardian Angel at the Living Theatre by personal invitation from Judith Malina, starring in the all female Waiting for Godot at the original Circle in the Square NYC, and touring with The Polyphonic Spree, supporting David Bowie. Jeneffa has served as an onset and private Acting Coach to many accomplished award-winning international actors on Emmy and BAFTA-nominated TV shows, and at major international drama schools. She continues to hold acting workshops in Sydney, Caracas Venezuela, Perth, Paris, NYC, Bangkok and London as per invitation and is regularly invited to give master-classes, talk on panels and judge work internationally at Pace University in NYC, Chulalongkorn University, Bangkok University, National Institute of Dramatic Art, University of New South Wales, Commune of Avigliano Umbro in Italy, Actors’ Centre Australia, and is a current board member of Fundación Gimnasio de Actores in Venezuela as Head of the Advisory Council. After receiving her MFA from the Actors’ Studio Drama School in NYC she became a proud life member of the Actors’ Studio. She was recently invited to the new Directors Unit of the Actors’ Studio in NYC under multi-award winner Estelle Parsons and was appointed as Adjunct Professor at Pace University Performing Arts School in NYC. Jeneffa has resided in the USA since 2012.
She is slated to direct her first feature By A Lady, produced by Big Swing Productions and written by Geetika Lizadi, and recently shadowed on Siren, in Vancouver, for Freeform, and is currently working as on-set acting coach for Tyler Perry’s hit new TV show, Young Dlyan.